In honor of November being ‘National Veterans and Military Families Month,’ we reflect and thank current and former military members for making the ultimate sacrifice to ensure the safety of the US and American citizens. Some of those heroic and brave individuals now work for Easterseals Southern California (ESSC), and here’s the story of two of them: Mervin Roxas and Al Lejarde.

Mervin Roxas is a Program Director for Orange County Adult Day Services. But from 2002 until 2005, Roxas served on the front lines of the United States Marine Corp. Roxas decided to enter the military at 19 years old; he served two tours in Iraq.

“I wanted to serve my country after September 11,” Roxas said. “When I got out, I went to Cal State Fullerton, and that’s how I found Easterseals.”

After learning about ESSC at a job fair, Roxas applied and became a life skills coach in 2008. In a couple of years, he was promoted to program assistant and then to program coordinator. He worked at the Bob Hope Veterans Support Program for a short while until becoming a program director in 2015.

Roxas said his favorite part of his job is spending time with the participants.

“I love hanging out with the people we support,” Roxas said. “They are the reason I’m still here today. Every time I see growth and achievement from them, it makes me more motivated to do more for them and help them realize their potential.”

Roxas is just one of many veterans who work for ESSC today. Another is  Al Lejarde, an Employment Specialist with the Bob Hope Veteran Support Program. Al served in the Marine Corp from 2004 until 2009. Originally, Lejarde was a military police officer until he was recruited for a unique program to be a presidential support specialist. His role was to protect the presidential helicopter and ensure the President of the United States traveled safely. Lejarde worked during the second term for the George W. Bush administration. 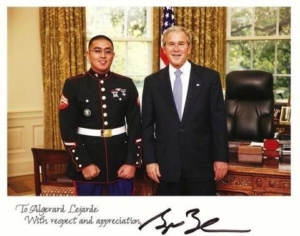 “I spent the entire time with that unit, traveling and conducting physical security for Marine One and traveling wherever the president went,” Lejarde said. 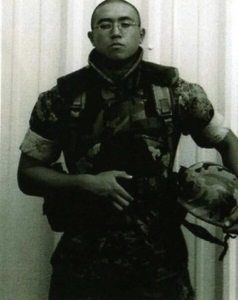 After leaving the military, Lejarde spent several years working in-house security for a defense contractor before going back to school and getting his bachelor’s degree. Around this time, he decided he wanted to pivot careers and enter the nonprofit sector. He interned with Mission Continues, a nonprofit that empowers veterans facing the challenge of adjusting to life at home to find new missions. From there, he landed a job running a program, helping homeless veterans for the Veterans Village of San Diego, where he came across ESSC.

“I was connected with employment specialist Cynthia Iannachia, who continues to work with the team,” Lejarde said. “Cynthia was advocating for another veteran to get hired where I was working. She was a great advocate. I hired him on the team.”

Lejarde developed a professional relationship with associates at the Bob Hope Veteran Support Program, and in 2017 he turned to them and became a client. Through the discovery process, Lejarde realized he had the skills and experience to help others like associates on the team were helping him.

“I was able to self-advocate, transition and move forward career wise,” Lejarde said. “And because of how I interacted with community, I had aptitude and skill set. Cynthia convinced me there would be a great position for me at the Bob Hope Support Program.”

Since March of 2018, Lejarde has been

advocating for veterans like himself and helping them find meaningful employment.

“I just have a passion to help and support veterans,” Lejarde said.

Thank you Mervin and Al for serving our country, and thanks to all veterans, their families and current military members for all that you do or have done for this country!

About the Author: Allison Collins-Smith

Allison Collins-Smith is an Internal Communications Specialist for Easterseals Southern California (ESSC.) Prior to Easterseals, she worked as a journalist in markets around the country. Allison has been nominated for three Emmy awards and won a Catalyst for Change award from the Arc of Virginia for her advocacy and journalism involving the disabled community.